All this week, the world has been celebrating Lunar New Year, Fat Tuesday, Galentine’s Day, and Valentine’s Day! For this week’s #travelthrowbackthursday #ttbt, we feature some snapshots of my friends’ fond Fat Tuesday memories in Rio de Janeiro (Brazil) and Tenerife (Canary Islands, Spain)!

My friend Monique grew up in Rio de Janeiro and then later in Queens, New York City. She is now an educator in the Bronx. In the 2009 photo above, she had just bought this costume for Carnival at the Beija-flor school of samba, which is located in the Nilopolis community where she grew up in Rio. Beija-flor means “hummingbird” in Portuguese. Well, this school has gained notoriety for their 6-time championships in Rio’s infamous Carnival Parade. However, what is even more wonderful about her attire is that people in the community spend hours making these beautiful costumes. She fondly recalls why she wanted to purchase this costume:

“I wanted to have a little piece of home with me here in the U.S.”

Here is a video of Beija-flor in last year’s Carnival Parade (they also won last year): 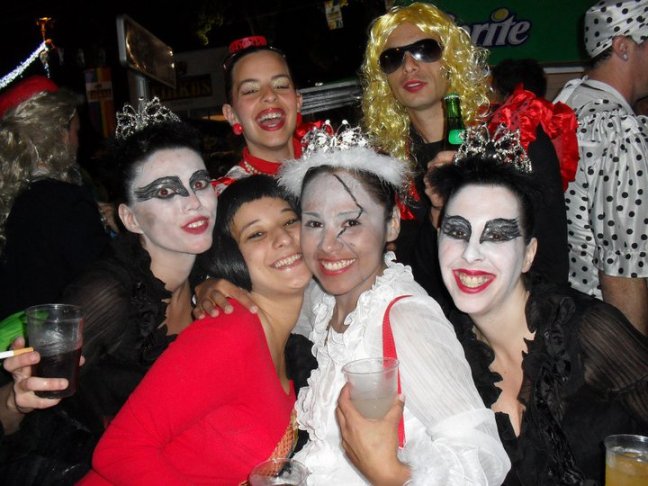 Now, the 2011 photo above is from my friend, Rachel (in white costume), and her amigas celebrating Carnival in her hometown of Santa Cruz, Tenerife. Santa Cruz is the capital of Tenerife, the biggest island in the Canary Islands, which is a part of Spain and is located off the coast of West Africa. Rachel’s ballerina costume above was inspired by the 2010 movie Black Swan. Called the “Carnaval de Festival de Santa Cruz de Tenerife”, this festival is actually the second most popular Carnival festival in the world–making it a twin city of Rio! Rachel misses her home so much–hopefully we can join her when she visits Tenerife sometime in the future! Here is a video from last year’s Santa Cruz Carnival: