A few weeks ago, Melo and I sat down and wrote our travel bucket list. As it turns out, we had to create two separate lists: an international travel bucket list and a domestic travel bucket list. There are just so many places to see and be, ya know? But to spare your boredom, we’ve narrowed it down to a reasonable number for the sake of this post.

This central-american paradise has been at the top of our list since 2014. Costa Rica touches both the Pacific and Atlantic oceans and it only takes three hours by car to go from coast to coast. It’s also rich in biodiversity and it’s white and black sand beaches attract tourists from all over the world. Pura Vida, ya’ll.

Who doesn’t want to go to Greece? I mean, c’mon! Look at that view! 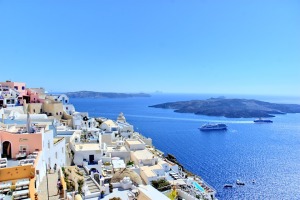 Aside from being an absolute traveler’s dream, Greece is rich in culture and history (Acropolis anyone?). Also, with its current economy undergoing changes, it’s extremely affordable for the traveler on a budget. 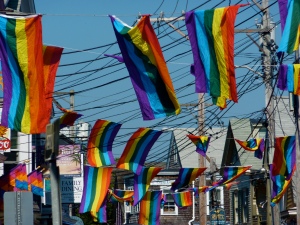 Ptwon is located at the very tip of Cape Cod making a coastal city. It is known for being a top LGBTQ vacation destination (which is a bonus for us). At only two hours drive from Boston, it’s an ideal place for a weekend getaway or add-on if you live in Boston or are just visiting.

When we drove across the country last summer, we fell in love with New Mexico. We only stayed there one night, but we decided we had to go back for a visit sometime. New Mexico has stunning sunsets. Plus, Melo is totally into the extraterrestrial thing (cue X-Files music). 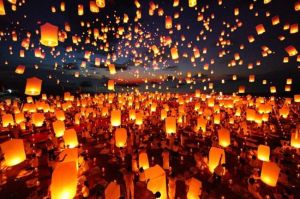 Besides the obvious culture, food, and paradise found on this southeast Asian country, there’s an annual festival of lights (in honor of Buddha) that is simply spectacular. Loi Krathang is a light festival where locals light tiny lotus shaped lanterns on the river. Yi Peng is held on land and locals (and tourists alike) light lanterns and release them into the evening sky. Remember Tangled? Yeah, they ripped it from this festival.

These are just a handful of places we’re hoping to see–and feature here–sometime soon!

Let us know your bucket list destinations in the comments section below!