Melo is always on the hunt for things happening in and around LA. Last week, after scouting several Facebook pages dedicated to informing the public about the goings-ons of the city, she found that The Pizza Press was opening in Pasadena and offering free pizza all day.

She had me at pizza.

Being a New Yorker by birth, I’m always down for pizza. It’s my love language. We were gonna be in Glendale anyway, so it wasn’t too much of a drive. Our friend Matt arrived before we did (at about 7pm). I didn’t get off of work until 6:30 and with the drive and traffic we didn’t get there until almost an hour later.

We parked and met Matt in line. He’d already been there about 25 minutes and had only moved about 10 feet, so we knew we were in for a little bit of a wait. The line crawled. I mean, literally crawled. It moved so slow. The new location is located right across the street from Pasadena City College on Colorado Blvd (which also runs into Old Town Pasadena) so we knew it was going to be busy. Plus, pizza takes a few minutes to bake–at the very least–so even if you get in to order, you still have to create your pizza, let it bake, and then check out. It’s an entire process.

Matt had to leave early (read: before we made it indoors) since his days begin really early in the morning. Melo and I endured the chilly night and other customers waiting to get their pizza. We finally made it inside around 8:15pm.  However, we still had to wait a bit to actually begin our order. The staff was great, however, and it was entertaining to see them work especially under so much pressure. They all kept their cool and were happy to greet each new customer. Once you get in to order, you can order the regular crust or a gluten-free option and then the dough is prepped by being flattened before you get to add on sauces and toppings.

We finally made it to the start of the ordering process around 8:40ishpm. Melo and I both went with the pink sauce (a combo of red and white alfredo sauces), though our toppings were different. They also have plain white sauces, red sauce, and a spicy red sauce as options for your base. The process from creation to check out took about 10-15 minutes so we didn’t actually sit down to eat until about 8:50pm.

We were starving by the time we sat down so we basically hoovered our pizzas. But they were delicious! We both agreed that they needed a bit more cheese, but other than that we really enjoyed them. The crust was nice crispy; really thin with a slight char on the edges. The toppings were super fresh. After the pizzas come out of the oven, you also have the option to add fresh greens like cilantro, arugula, and basil as well as extra sauces like bbq, balsamic glaze, sriracha, and others. Melo chose cilantro and bbq sauce and I added arugula and balsamic glaze.

Overall, we really enjoyed The Pizza Press. And even though it was almost 2 hours before we were able to enjoy our pizzas, the energy in line was really high and everyone was really excited to be a part of the opening. If you’re ever in Pasadena, be sure to check out The Pizza Press. There is a lot behind the restaurant with one hour of free parking.

And don’t forget to subscribe to Plate and Passport!

Stand up cooler with beverages

The inside of the restaurant 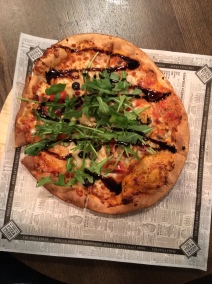 Closeup of back door 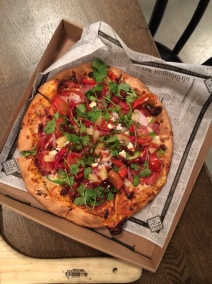 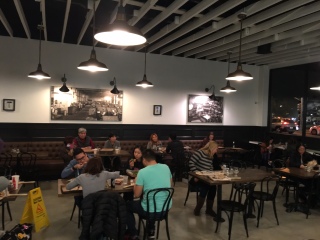 Open floor plan on the inside of the restaurant